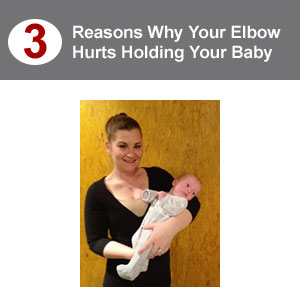 As a new father, I can honestly say that nothing in this world compares to looking into the eyes of your new born baby.

It is simply a miracle!

You would never think that over time, as you lift, hug, snuggle, dress your baby …

It could actually cause you physical pain and discomfort.

To be more specific…

I am talking about when your elbow hurts from holding your baby – infants included!

While it is true that more women than men have this complaint, it can equally affect both.

And the funny part, well not literally funny, is that it doesn’t matter how big or strong you are …

It can happen to you!

The last thing you want is to not be able to handle and hold your baby with 100 percent confidence.

Well this can happen when you are stricken with elbow pain and discomfort.

When does this elbow pain often develop?

New mothers often complain about elbow soreness on the outside of the upper forearm from handling their babies.

Even the supporting muscles in, leading to and around your elbow can become painful and sore.

If you are having pain in the muscles around your elbow, learn what this is a sign of – and more importantly should you even worry about it.

Symptoms begin to appear usually around the three month mark.

A Mother’s elbow troubles is often not documented in the media, and nor is it a frequently-mentioned condition in any prenatal class.

The focus of many prenatal classes is leading up to the birth and what to expect in the first week or so.

Motherhood is most commonly whittled down to the period of pregnancy, and not much care – nor attention – is allowed for difficult post-partum periods.

They are provided warnings of nauseous mornings, irritable bladders, mood swings, and aches and swellings dominating the entire body.

Once a child is birthed, the parents are left largely to their own devices to deal with any personal pains – whether they are physical or mental.

There are 3 main reasons as to why your elbow is hurting:

First – you could have simply overused your dominant arm the day before performing repetitive actions or movements.

You only notice it now when picking up your baby.

The second reason is that you could have a more significant injury such as a broken arm, especially if you fell and struck your elbow on a hard surface within the past 24 – 48 hours.

But the third and most likely reason for your elbow pain, is you are stricken with the most common type of elbow condition that affects new parents – tennis elbow.

What is Tennis Elbow? 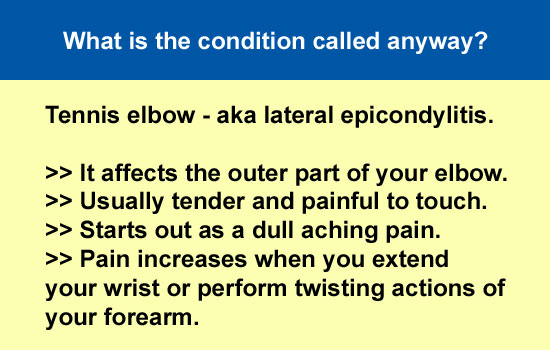 Most new Mothers often complain of severe aches surrounding the elbow region, usually in the arm that supports the majority of the baby’s weight.

Tennis Elbow – aka lateral epicondylitis – is defined as a condition where the outer area of the elbow becomes sore, tender, and prone to aches.

Coupling this soreness is often a discomforting inflammation of the forearm muscles.

This accompanying condition is referred to as tendonitis, and is characterized by an uncomfortable and aching inflammation of the tendons surrounding a strained region – in this case, the dominant elbow and arm when a parent is cradling their child.

As such, a parent plagued by both a sore elbow, and inflamed muscles would be said to having been affected by epicondylitis tendonitis.

The reason tendonitis is often paired with Tennis Elbow is due to the forearm muscles – often called extensors – being connected to the lateral epicondyle.

These extensors assist in the smooth bending and flexing of the wrist and fingers.

In non-medical terms, the nature of the arm and it’s interconnected muscles, tendons, and joints makes for paired injuries or aches.

Your forearm muscles in question extend to and attach at the wrist through your fingers.

There have been documented cases where young Mothers of petite or slight frames have splintered their wrists due to handling their heavier newborns for prolonged periods of time.

There is more information over here at BabyandBump.com where you can join the discussion.

Such injuries are often also associated with damaged or compressed nerves and tissues surrounding the problem area.

Essentially, an entire arm and its anatomy may become affected due to the nature of the injury.

The condition receives its name due it being widely caused when newer tennis-players repeatedly hit tennis balls with the incorrect movements, resulting in jarring blows to the elbow joint.

What causes this condition? 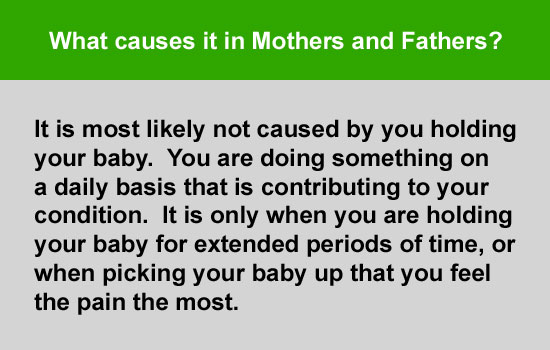 Tennis elbow and the often-accompanying tendonitis are cataloged as repetitive-strain injuries.

Redundant actions being performed repetitively over a long period of time may cause the associated tendons to become inflamed and damaged.

Due to the constant repetition of the action – that is, the picking up and handling of the baby – the tendons are not able to successfully and completely heal.

A typical newborn weighs anywhere between six and nine pounds, on average.

This weight, coupled with incorrect and straining ninety-degree-angle cradling, may lead to severe damage over time.

For Mothers constantly picking up and cradling children, the repetitive and prolonged strain may result in aches that extend from the fingers, travel up the wrist and forearm, and settle in the elbow joint.

This would make the entire arm virtually impossible to use for any task.

Whichever side a Mother prefers when cradling her child will essentially become far too sore and stiff to use as time passes by.

Moreover, such a condition may seriously impede the life and daily routine of any woman or man, as well as how well she/he is able to provide care for their child.

Some more great tips and helpful information at WhattoExpect.com on soothing sore arms from picking up your baby.

Signs and symptoms to watch out for … 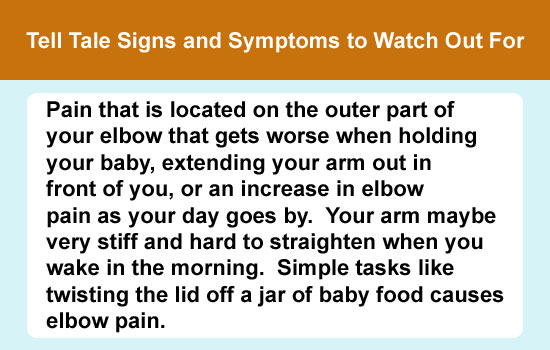 This inflammation of the tendons, muscles, and joints, and compression of the nerves, covers an entire arm and may begin to devolve into short spurts of numbness.

What begins as a general soreness or aching may quickly develop into shooting pains that numb the tips of the fingers.

Such pain is most likely experienced when the affected elbow is strained or put to use.

This may occur when driving, talking on the phone, picking up laundry, or when attempting to cradle the baby.

Pain in the wrist – due to the damage caused to the extensors – may crop up when a Mother attempts to bottle-feed her child, or pick the baby up from a cradle or crib.

Other unrelated activities, such as writing, typing, or pouring a container may also cause extreme pain to the wrist.

An overall stiffness and aching sensation experienced along the length of the forearm may also be a symptom of Tennis Elbow.

The pain if often cited as “radiating” from the outer portion of the elbow joint, and travelling in consistent aches downwards.

Moreover, an unsteady or painful grip – such as when shaking hands, or turning a doorknob – may also be symptoms to remain on the lookout for. 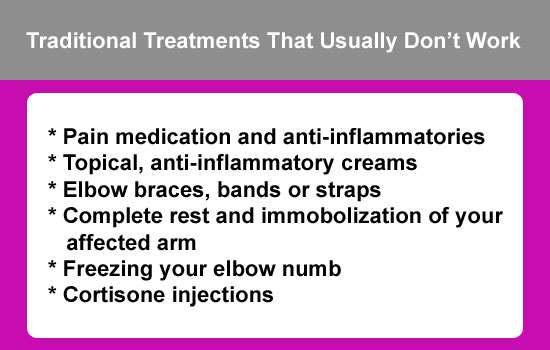 Regardless of the intensity of the pain, any individual would be advised to visit the doctor for a checkup and consultation.

A suitable regimen for treatment may be advised and followed from that point onwards.

In certain cases, the condition and associated pain managed to heal naturally between six and twenty four months, without the need for proper medical treatment.

As time wears on, Mothers ease the handling and cradling of infants, and the affected areas may be given the time needed to heal naturally.

Chronically severe pain, however, may be treated using a variety of methods.

Mothers are generally advised to relax the affected arm.

These resting periods may be accompanied by heating pads or hot water bottles in order to promote the expedited relaxation of the muscles and tendons.

Following this protocol, a Mother may be able to regain routine and comfortable control over the arm, and go about her duties uninterrupted.

In other cases, a rubber bar may be employed.

The exercise involves grabbing a rubber bar, twisting it, and then slowly untwisting it.

This exercise should be carried out for a medically-advised number of repetitions.

This method has proven to decrease pain and aches, and increase the strength and flexibility of the affected arm.

At-home therapy exercises may also prove to be helpful.

Wrapping the affected elbow loosely with a towel, a palm-up, palm-down exercise may assist the healing process, alongside removing any associated stiffness along the length of the forearm.

Certain anti-inflammatory medication is available over-the-counter, and Vitamin B6 may also assist with general soreness and pain.

What you can do right now!

Cautionary measures may be taken, in order to slow down the damage or debilitation of the affected area.

Switching arms when picking up and cradling a baby will prove to be helpful.

Moreover, using the un-preferred arm or side when driving, talking on the phone, or carrying out daily chores will prevent over-exertion of the preferred arm and elbow joint.

When at rest, both arms should be kept straight and extended.

A soft pillow should be used when bottle-feeding the infant, in order to better distribute the weight and prevent it from falling entirely on the preferred arm and elbow.

Mothers may choose to invest in baby carriers that may be strapped onto the front of the body.

Battery-powered rockers and cradles remove the hassle of a Mother cradling a fussy baby in her arms.

Baby carriers with slings may be bought, so that the weight may fall on the shoulder, as opposed to hand-held bags that cause further pain to the wrist and forearm.

But here’s the thing …

There are just 5 easy steps you need to implement and follow.

And the best part …

You can do them sitting on the couch while your baby is sleeping!

It really doesn’t get an easier than that!

Simply click on the button below to watch these 5 simple steps in action. 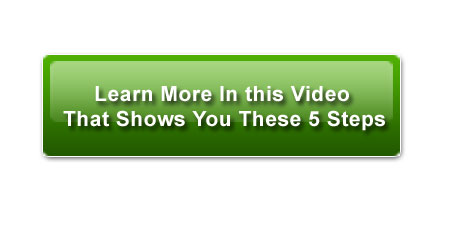 Most Popular Reads About Tennis Elbow